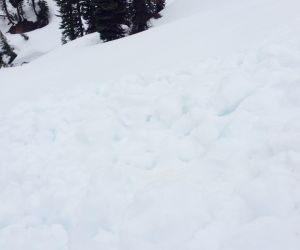 This is sketchy.  Most mountain deaths occur on the descent.  You’re often hurting.  You’re always tired.  Down seems easy, but down is what kills you the most.  Slips.  Falls.  Rock falls.  Avalanches.  Gravity has dozens of ways to kill you and you’re that much closer to meeting a gravity-driven end when you’re heading down anyway.  You don’t climb mountains so much to gain wisdom as to shed stupidity.  But you’ll be tempted to do stupid things to get off the mountain sooner.  Sometimes the choices get winnowed down by circumstance, and you’ll have to do something sketchy, if not stupid, to get down.

This is one of those times.

Convex slope, about 45 degrees, early summer south-facing.  Above the treeline and subject to wind and sun.  Crossed it on the way up about three hours ago, and it was sketchy then, with visual evidence of prior slides.  Searched for a better line, but there wasn’t any evident better path.  Took my time.  Tread lightly.  Made it across.

Three hours of rain, sleet and wet snow have made it worse.  The slope is soup.  Stew, at best.  Wasn’t thinking I’d be coming back this way.  Dumb.

But not completely.  Stop and think.  Tether the ice axe to the pack.  Pull two energy bars and Jeep key out of the pack and zip them into a pocket.  Unbuckle the pack.  If this slope gives way, I don’t want the pack beating me to death or the ice axe stabbing me on the way down.  If I lose the pack, so be it.  Two energy bars will keep me going back to the Jeep.  That’s the plan.

Well … the laugh was unexpected.  Five hundred feet goes by in something under ten seconds.  Gain my bearings.  Snow is everywhere.  Down my jacket.  Up my pants.  In my ears.  Covering my face.  Check the parts.  Legs work.  Was worried about one of them snapping with the snowshoes strapped to the feet.  That would have - completely - sucked.  Arms work.  The pack?  The pack’s over there.  Teeth start chattering.  Covered in snow and cold.

Get the pack.  Easier said than done in the wreckage of snow.  Find some nearby trees for shelter and pitch the tent asap.  Thankfully have the Black Diamond Firstlight with me so it’s just a couple minutes.  Hypothermia is no fun and need to get out of these wet clothes.  Boil some water, and get some warm oatmeal in me.  Rest a bit, and then move down the mountain some more.  There’s worse weather ahead tonight and every foot further down the mountain will make the night more bearable.

Settle in for the night.  Play some music to pass the time.  Break camp at first light and break a new trail through a foot of new snow back to the Jeep, which is all alone in the parking lot.  It’s a five-hour drive from the camp of solitude to the Fortress of Solitude and there’s some thinking along the way.

The point is, be ready.  Don’t let fear stop you, and try not to stab yourself on the way down.

Laugh if you can.