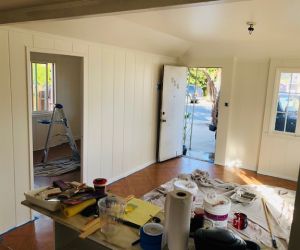 Been a year.  One whole ride around the sun.  Three hundred and sixty-five dawns and, after that blinding yellow orb sinks into the Pacific just down the street, just as many sunsets.  There were twenty-five rodeos round the hydrogen gas bag before I met her, but that was just fate taking enough time to let us know how lucky we were.

Time is a construct.  Most everything is a construct.  Soon is looking like fourteen to sixteen months, pending vaccine production.  Twenty-five years.  Sixteen months.  Can’t really have a great love story without some challenges along the way.  One of those challenges is the day gig.  People say just ignore the stay-at-home order and drive back to Iowa.  None of those people are city managers, cause city managers know most of the deal is setting the example.  If I didn’t have the gig, I could skirt the mandate and nobody would know or care.

I do have the gig, so there will be none of that.  Time and the job are both constructs, and the art is constructing meaning in them.  Sometimes, literally constructing.  There’s time to fill, so fill it well.

The house at 956 Hilby is unremarkable, except of course its cost for what it was.  North of $400K for an 800 square foot, two-bedroom cottage full of bugs and unpermitted construction should be criminal, but that’s the cost of housing on this little slice of weather and vista heaven, so the City paid it.  Paid it out of our affordable housing fund, with the intention of fixing it up and renting it to a family that needs affordable housing.  The City’s good intentions to fix it up became as confounded as mine to see Marcia soon due to the pandemic, so it’s been sitting, untouched.

It turns out I’m both fairly handy and particularly ill-suited to doing nothing or feeling sorry for myself.  Also a little slow on the uptake every now and then, so a little embarrassed I didn’t figure out sooner that I should just do the renovation on the City-owned house myself.  Fill up time (it’s just a construct, but it sure can drag), save the City some money, amuse myself with construction activity, do a good deed … there’s really no downside.  And so the week City Hall was closed between Christmas and New Years was filled with sawzalls, miter boxes, paint swatches and rollers.

Honestly, the personal investment in the project is a little (written myself into a corner, here) personal.  Some family that’s not at all wealthy will live here.  And there will be people who will be monitoring every expense at the house and keeping track of whether the City overspent on counter-tops or light fixtures or something because, ain’t it fun to critique government?  So, we could low-bid every part of the project and put a roof over some poor family’s head and call it good.  We could do the basic government thing.

But, for those of you who haven’t been watching oh, I don’t know, the pandemic, basic government isn’t good enough.  Great government, government that is skilled, innovative, and inclusive is (or should be) the base level expectation.

The personal part is this.  For easily the first twenty-eight rides around the sun, I was poor.  Powdered milk, orphanage, no heat in winter, holes in my shoes, student loan poor.  When I was in high-school, I never had a friend over to my house.  Not once.  Mother dying.  Father unable to work.  Deferred maintenance.  Worn-out furniture. Fireplace for heat.  I / we were poor.  I understood it wasn’t my fault, but I just didn’t want to advertise it.  Determined to be the change I wished to see in the world, the Davenport home was/is the complete opposite.  The kids' friends were over all the time, laughing, having fun, playing music, rummaging through the fridge like they lived there.  Time's a construct, and remembering the good times constructs happiness.

Some child or children are going to live in the house at 956 Hilby when I’m done with it.  He / she / they won’t be wealthy.  But what they’re not going to be is embarrassed about the home they live in.  They are going to live in a house that’s bright and airy.  With fresh paint, solar energy and new appliances.  A house with hand-crafted doors, built-ins, cabinets and countertops that are every bit the match of what the one-percenters who populate the peninsula have in their homes.  And no penny-pinching local government faultfinder will be able to criticize those kids having nice things because the hand-crafting will come from my hands, on my time.

Been a year since I’ve seen the kids.  And while I’d like to be home, in our home, filled with love and laughter ... imagining the love and laughter that will be in this home, for some family I don’t know, will have to do.

Time is a construct, and when we see each other again, it will be as if we never parted.

I am lucky beyond words.