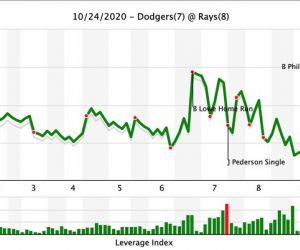 Update: If your pitcher has shut down the strongest hitting team in the league through six innings, you let him keep going if someone reaches first base.

There’s your October surprise.  The Los Angeles Dodgers, with their $107 million payroll, lose Game 4 of the World Series to the 189th best player drafted eight years ago, who makes the MLB minimum wage.  Bouncing around the league on a goofy laugh, good wheels and a glove that works sometimes, Brett Phillips was hanging by the thread of being the last man available on a 28-man roster on his fourth team in the show.  Left off the ALCS roster, he never had a post-season hit, and only hits .105 on 1-2 counts.  But there he was, his team’s last chance.  The video is here.

Pull up a ball bucket and take a seat, folks.  Because this is the kind of stuff Siftings was made for.

I’d be lying if I said that was the most exciting end of a ball game I’ve ever seen, since there’s that one in Dubuque that I’ve always enjoyed.  I’d also be lying if I said I saw it as it happened, what with not having a television, and all.  But I wouldn’t be lying if I said there’s a pile of life lessons in the end of that game.  Let’s get the baseball ones out of the way first.

The Dodgers made ten mistakes.  The pitcher, having been gifted with the second strike, should never have thrown the next ball in the strike zone.  Ego is a killer, and you’re being paid to win ballgames, not to be so toxically masculine you think every pitch is a commentary on your manhood.  The outfielders were poorly positioned.  That’s on the coaches.  The centerfielder did five things wrong (I’m an outfield coach, trust me).  He played the ball to his side like a do or die play but that wasn’t the game situation.  He looked up at the runners right when he should have been looking at the ball, which is why he missed it.  He stuck with it (good) but when he got to the ball he was close enough to throw to the catcher but he hit the cut-off man instead, adding unnecessary complexity to the play.  Embedded in the mistake to throw to the cut man was the physical mistake of not setting his feet and the psychological mistake to not put his first mistake behind him, immediately.  He threw to the cut man, psychologically, because he couldn’t deal with the finality of throwing to the catcher.  The first basemen threw to the wrong side of the plate.  The catcher started making the tag before he had the ball.  Of all the mistakes, that one is most forgivable, because he didn’t know how close the runner was.

The unforgivable mistake was the pitcher not backing up the catcher.  Don’t think, just throw, is a good maxim for relievers.  But when that ball leaves your hand, you’re not a pitcher anymore.  You’re an infielder.  So, act like it.  Act like you care more about the team than yourself.  You want to mope around about something that went not exactly as your ego planned it?  Maybe find a line of work that isn’t nationally televised.

We watch the game because it’s an opera you don’t have to dress up for.  There’s pretzels and beer, too.  English and Spanish are mostly spoken, but there’s Korean and Japanese as well.  There’s some Latin word that starts with “f” and ends in “auk” that gets shouted a lot, for reasons unknown to me.

Baseball isn’t everything, but it’s close.  We watch the game because it’s the most hopeful distillation of the birth school work death merry-go-round we each get one ticket for.  Keep your hands inside the ride, and keep the ball in front of you (the centerfielder voice in my head never leaves me, even in dreams).  A. Bartlett Giamatti famously noted baseball is designed to break your heart and I’m secure enough to admit that my eyes have been watery once or twice round the game.

We don’t say that Latin word at the Malin household.  We say Bartman.

But in this year 2020, when most everything is so awful, they whipped up a little baseball to give us something.  Something hopeful.  Something fun.  Something like life as we remember it, and may get back to one day.  And so I was down at the ball diamond yesterday, alone, hitting off a tee and throwing at a garbage can target propped up on a milk crate over home plate.   And not feeling dumb about it, at all.  Real baseball, real life, will return.

The life lesson of the game is to never give up.  I don’t know Brett Phillips, but if he’s 26, he’s been playing the game more than twenty years.  He’s a decade past his youth when he was the best player on the team.  He’s the 28th best player on the third lowest payroll team in the major leagues.  There’s a whole bunch of ballplayers who are, stat-wise, better than he is.  But through the errors and strikeouts and injuries and minor league meat grinder and twenty years of heartbreak of the game, he didn't bring stats with him to the batter’s box with two outs in the bottom of the ninth at the World Series.  He brought himself, with his goofy laugh, grinder's smile and belief that anything's possible.  Mookie got us tacos.  Brett got us hope.

We watch the game because it’s the one that not only marks the time, it suspends time.  Someone should clue Rob Manfred in because, honestly, we like that part.  We like the part where our baseball and life memories overlap.  We like the part about not knowing exactly when it will end.  Baseball IS life Rob, and not knowing when the merry-go-round is gonna stop is part of the make each day count deal.  So is … if you’re doing it right like Brett, the grinder’s smile and belief that anything is possible.

Put in the work.  Take your shot.  Run like the everything is possible kid you never have to stop being.