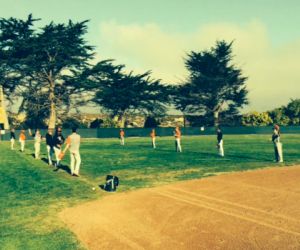 Maybe thirteen, maybe fourteen.  I’m asked how many kids are on the Seaside High baseball team this season and can’t give an exact answer.  Basketball is winding down and three bballers might join the squad in the weeks ahead.  Ten or eleven at practice, so far.

Maybe ten, maybe eleven.  It’s not that I can’t count.  It’s that there’s kids who want to play but haven’t played much, or at all, before, and they’re not sure.

That’s nothing like high school ball as I knew it in Iowa.  The Quad Cities are a baseball mecca, with thousands of kids playing baseball and softball over the summer.  There's well over a hundred youth teams, propping up the local ice cream shop economy with after game treats.  From backyards to sandlots to the best minor league ballpark on the planet, any summer in Davenport is a symphony of pings, thwacks and pops.

When summer ends, fall ball begins.  And when the last leaf of autumn has dropped, the hardcore thwack and ping their way through the depths of winter.  In abandoned warehouses, leaky barns, vacant Rock Island storefronts and tarp-covered batting cages, the kids who want to make a high school team keep at it.  Hoodied against the cold, they throw.  In Carhartt batting gloves, they hit.  Trudging through snow, they leave their Sorels at the door, and field grounders off frozen concrete floors.  It's ten below zero today back where the river runs west, and I assure you there's kids who have finished their homework early so they can get their hacks in.

That’s the only way to make a high school team with eighty or ninety freshmen trying out for twenty-two slots.  Miss that cut, and there’s no way you’ll catch up to make the sophomore team.  Miss a midwinter junior year practice, and tempt fate that might leave you off the varsity team when twenty-two juniors get cut to eleven.  If you’re one of the eleven seniors who make the varsity team, there’s north of three hundred boys and dozens of girls at your school who would take your position on the team if they could.  So … you practice.

With dugouts chock full of immaculately prepped six foot plus baseball studs, high school coaches in the Quad Cities are living the dream.  Or are they?

Pressed into service for soccer and football practice, the Seaside High ballfield is a mess on day one, and the only on-field skills I can observe are weed-pulling, hole-filling and raking.  Day two begins with stretching and throwing and my heart breaking.  We have a few ballplayers who throw and catch with mechanistic precision.  Kids who have clearly spent thousands of hours morphing their arms into trebuchets, with well-worn mitts ready for the season ahead.

But there’s a couple kids with mechanics that suggest this may be the first time they’ve been on a ball diamond, and there’s one without a mitt at all.  Households with millionaires dot the Monterey Peninsula.  I’ve got a ballplayer who can’t afford a ball glove.  Life ain’t fair, but if I live to do anything, it’s to square that up a bit.  I toss my mitt to ____  (ain’t using names, here) and hobble over to the dugout for my bullpen catcher’s mitt.  The rifle arms are throwing to each other, and the newish kids are trying to stay out of harm’s way, a safe distance from the heaters making gloves pop.  I take up station on the line, and start to throw with the new kids, going backwards in time nearly fifteen years.  The basics.  How to hold the glove.  How to hold the ball.  How the feet stride and upper body rotates for the throw.

Here’s what I know.  It’s a beautiful game.  It’s a merciless game.  You’ll fail more than you succeed at the plate, with everyone watching.  You’ll get picked off because coach kept telling you to extend your lead.  You’ll make an error at the game your girlfriend came to watch.  It’s brutal.  So if you can play the game well and honorably, there’s a good chance you’ll make it through the mortal coil disappointments with your spirit intact.  Damn near every part of the game requires swagger, smarts and humility in equal measure, and swagger’s hard to come by when your own personal mitt is too much to ask for.

When I got dumped at the orphanage, I had a science encyclopedia, dear ol’ dad’s Bluejacket’s Manual and my mitt.  That’s it.  The books weren’t much help on the social front, though I loved them regardless.  The mitt was my passport to acceptance and friendship, fitting in with each fly ball I ran down.  In a place where your identity gets stripped away at the reception desk, the ball diamond was the one place that felt like home.  Damn near a half century passes and I see a kid brave enough to go out for baseball without a mitt to call his own.  That’s getting squared away, right quick.  I don’t know much about his circumstances yet, but this ball diamond and this game will be his home, and it’s going to be nurturing and supportive.

We’re gonna play some teams chock full of rich kids.  Teams bursting with monetary privilege, stable families and dads who’ve tossed balls to their sons since they were toddlers.  I’ve got nothing against those boys, and I wish them all the best.

Maybe we’ll lose.  But I wouldn’t count on it.