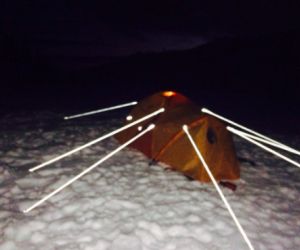 There’s only so much clarity we can take at any one time.  Too much, and our head explodes or our heart implodes.  Or both.

So, sometimes, in addition to these things not coming out quite right, some don’t come out for day or weeks.  Or years.  Or lifetimes, I suppose.  Warning: length alert.  Dateline (I’ve always wanted to write that) February 17.

It’s a roar, not a howl.  The forecast kept me off Mount Shasta, but the Ridge Lakes saddle between Brokeoff Mountain and Mount Diller ain’t exactly a summer meadow.  The same high-pressure system cascading over Shasta is pummeling the range’s southern-most peak.  Or, what’s left of it, to be more specific.  Brokeoff Mountain is the remnant of Mount Tehama, a former giant of the Cascade Range.  Former giant is how these volcano things end up, either spewing lava and collapsing or exploding, Mount St. Helens style.

There’s twenty-four stake down / tie down points on a Marmot Thor tent.  I’m using twenty-two of them, and hoping the unused two aren’t the death of me.  The wind roars through the darkness like a freight train without end.  There will be no sleep tonight.  The swooshing din of the gusts, rushing down the flanks of the peaks on both sides of the saddle, arrives ten or so seconds before the blast itself.  Enough for a deep breath and some Han Solo optimism.  Don’t worry, she’ll hold together.  Come on baby, hold together.

A book keeps me company through the night.  “One Day As a Tiger”, by John Porter.  In the flickering of the flashlight swaying from a hook at the peak of the tent, I read of Alex MacIntyre and the dawn of fast and light alpinism.  Rather than attrition war your way up a mountain, with legions of porters and Sherpas and your own mountain of supplies, MacIntyre was one of the pioneers of two and three-man teams, with only what they could carry on their backs, sprinting (comparatively) up mountains.  It’s sort of how I do it, except for the sprint, or skill, or friends part.

The three-day weekends are the most difficult so, for reasons not easily understood much less explained, I’m prone to head out to the wilderness.  I just find man vs. nature less dangerous than man vs. himself.  There’s a bit of a lull in the litigation and nothing to do on that front, so it’s either solitary confinement at the Fortress of Solitude or solo climbing somewhere interesting.  Lassen Volcanic National Park is certainly interesting.  Peaks, snow, and volcano vents, hissing sulphur and / or boiling mud.  The back of the map says “solitude abounds” in winter, and the map doesn’t lie.  I won’t see anyone for two days, and the solo falling / avalanche wariness gets a new hazard to factor in; because sliding down some icy slope into one of these boiling pots of acid-mud would be a rather unpleasant end to it all.

It all ends, of course, someday.  Hence the title of the book.  Better to live one day as a tiger than a thousand years as a sheep.  Fast and light ascents of mountains are living as a tiger, with a certain rapacious purity to them.  It’s also pragmatic.  You spend enough time in the ice and snow above the treeline on a mountain, you’ll die on it.  There’s a thousand things that can go wrong and you’re hours, days and / or lifetimes away from help, so the shorter your stay, the better chance you have to live to tell the tale.

Alex MacIntyre died at the age of twenty-eight.  A single random stone, falling from above on Annapurna’s south face, struck him in the head, killing him instantly.  He was a gifted climber.  I’m a doofus in a freezing tent, miles from anyone.

Dawn finally arrives and the family birthday present is helping assure there will be another one.  An old-school, wood-shafted ice axe.  Sure.  It’s heavier.  But it’s warmer to the touch, more shock-absorbing and just generally more Thwack Factory-ish than the high-tech metal one I have in my other hand.  The two ice axes, in cadence, keep at least one cramponed-boot and one axe spike dug into the snow/ice at all times.  It’s slow going on the steep, blown away ridgeline, but it’s not like I’m slowing down the team.  There is no team.  Thus, Diamond Peak, Brokeoff Mountain and Mount Diller all grant me a frozen visit over the two days and two nights.  At least I avoided the frozen food aisle at Safeway.

Doing something nuts to stay sane ain’t easy to explain, and I’m not sure I quite understand it yet.  I sure didn’t as I fired up the wifi back at the FOS and checked in on the world.  The slippery games are going on in South Korea, and there’s this ice dancing couple from Canada who are … um, rapaciously sexy.  Tessa Virtue and Scott Moir won the gold medal, and their routine had people talking about whether their amour de’ice carried over to their personal lives.  Actually, it was far more crass than that.

They’ve been skating together for twenty-some years, since they were kids.  The Canadian Broadcast Company put together some montage of them skating through the years, to a lovely little song.  Google around, it won’t be hard to find.  They’re kids.  They’re teenagers.  They’re twenty-somethings.  They’re kids again.  They’re adults.  They’re gold medalists.  It’s very well done.  They’re lovers for sure.  The best kind of lovers – not dependent on sex.  The little looks.  The hand-holding.  The protective hug.  Years together, they’re not manufacturing emotion on the ice.  They love each other for real, and all you prying, crass voyeurs should just move on to sully something less beautiful.

And I start crying.  Not in any sort of unmasculine way, of course.  Just watery eyes and tears.  Perfectly masculine and Fortress of Solitude tough.

So … there’s some processing that goes on and, for some strange reason, it comes to me that the life montage and the lonely guy in the tent being torn at by the tempest are the same.  Peaks and valleys in the montage.  Strength and love forged in difficulty.  On the ice.  On the mountain ice.  The hand holding in the montage.  Twenty-two guy wires pinning the tent down in the gale.  Someday to be together with Marcia again.  Doing something you can’t quite explain, but can’t stop.  Does love hit you like a random stone from above or is it the erosion of all artifice, over a life together?

As always, beware the false choice.