"A John Hughes Film" scrolling through the credits of a 1980s movie was soothing to the soul.  Ferris Bueller’s Day Off, Breakfast Club, Pretty In Pink and a dozen more, scrolling by, telling some Capraesque tale of longing and redemption, but with vibrant colors and slick soundtracks.  The decade scrolled by for me too, going from high-school non-grad to grad school grad and then work and marriage, with the wedding in black and white, cuz we were timeless, and cool.

Class of 80 President Johnny Keefe calls out of the blue about the 40-year reunion and his first question is; “still got a Jeep?”.  One of my groomsmen, we pick up the conversation like decades haven’t passed and I laughingly reply, “of course”.  John says he has one too, and I’m to blame / credit.  The first Jeep was described by Doris many years ago as a “traveling bubble of fun” and I can’t argue with that.  Johnny notes I’d easily win the reunion distance award and he understands if I can’t make it but, he pleads, “people are clamoring for Craig”.  John’s on speaker and Doris, my favorite female classmate by an order of magnitude, on cue clamors, “We want Crrraaaiiiggg”.  I giggle, and tell them I’ll do what I can.

We reminisce for a bit and I do the pandemic vs. September in Illinois calculus in my head.  It would be funny if I showed up in the current Jeep, with the vintage “Levis” stickers on it, cuz they’re the only ones who’d get the joke [personal note: telling jokes nobody gets is my side hustle].  Or I could borrow Colin’s Lotus and let them know the Class of 80 non-grad with the signature Team Lotus Formula 1 ballcap finally had his day in the sun.  But that’s way too mid-life crisisy for me and, anyway, the high school girls I wanted to impress were the Class of 81 (a year behind, but mostly older).

Life’s a fractal, with small puzzles fitting into larger puzzles.  A recent small puzzle had me holding A John Hughes Film sticker and trying to figure out where to put it.  The shelter in place order has put the kibosh on mountain climbing and I needed something to do with my weekends so I got a project car.  An AW11.  For non car geeks, that’s the first generation MR2.  Built from 1985 to 1989, it’s an 80’s tastic wedge from the golden age of Toyota.  Mid-engined, honed to an arrow edge, with pop-up headlights and a reputation for snap oversteer, it’s a go-kart with a license plate.  I blame, just a little, a wonderful book by Michael Perry titled Truck: A Love Story, for the idea of restoring a vehicle.

I could geek on about the nuance and aesthetic superiority of the first model year but won't.  It’s a silver 85 that was a great deal because it needed work and paint and more work and the owner needed his garage space back.  It’s pre-computer, all mechanical, so that’s a fun series of weekends getting greasy and making my knuckles bleed bringing it back to life.  The idea – and this is kinda important – of the car is what would it be if I wasn’t a desperately poor college student in the mid 80s.  What if I had been a … a carpenter, for instance, and had cash to burn like my high school friends who didn’t go to college.  What would my life had been?  Honestly, John called out of the blue.

Can you have something, invest part of your being in anything, without there being a guiding idea?  I suppose.  There’s plenty of beige houses.  But you don’t get to “bubble of fun” without commitment to a guiding idea.  For better or better, the guiding idea of the AW11 is what would it have been if I hadn’t been in college.

And so it is.  Through the daydreaming of typing “old school” into international ebayish and craigslisty search engines for nights on end, there’s now a collection of three period-correct amplifiers, two crossovers, a gooseneck equalizer, seven speakers and a cd shuttle with roughly the amount of wiring in the Apollo command module packed into the two-seat cabin.  It's a small space so one of the amps is between the seats, the crossovers are velcroed to the window behind the headrest and passengers (not that I've had any) need to step around the subwoofer in front of their seat to enter.  And they'll need to speak up, given the rear speakers being inches from my ears.  If I say the stereo cost more than the car someone might read this and I might have some explaining to do so I won’t.  But if I turn it up too much, the windshield may crack.  Which is a pain, because you try to source a thirty-five year-old windshield. The NOS Recaro fabric for the seats was difficult enough.  All I'm waiting on now is for Yamaha to start selling their gorgeous electric motors (be still my Yamaha fan boy heart) to swap out the (Yamaha designed) 4AGE gas engine for something 1.211 gigawatts more interesting than anything Elon is selling.  Having already built the electric Malinator 3000 bicycle, how hard could it be?  Same thing, just bigger parts.

Anyway, so I have this A John Hughes Film sticker in my hands because the museum – it’s become a museum complete with a late 80's WXRT fuchsia and teal rear window cling and vintage radar detector and I should charge admission – has a sunroof with a sunscreen and I just thought the sunscreen would look rad if it were sticker-bombed in 80s / early 90s (for you, Liz) bands / errata.  And I’m trying to figure out where the A John Hughes Film sticker fits when the Always Saturday synapse by Guadalcanal Diary fires and I get distracted cuz that’s a thing and then the space where it maybe shoulda went gets filled in with I’ll say Siouxsie and the Banshees.  I dunno.  I didn’t film the tumult. 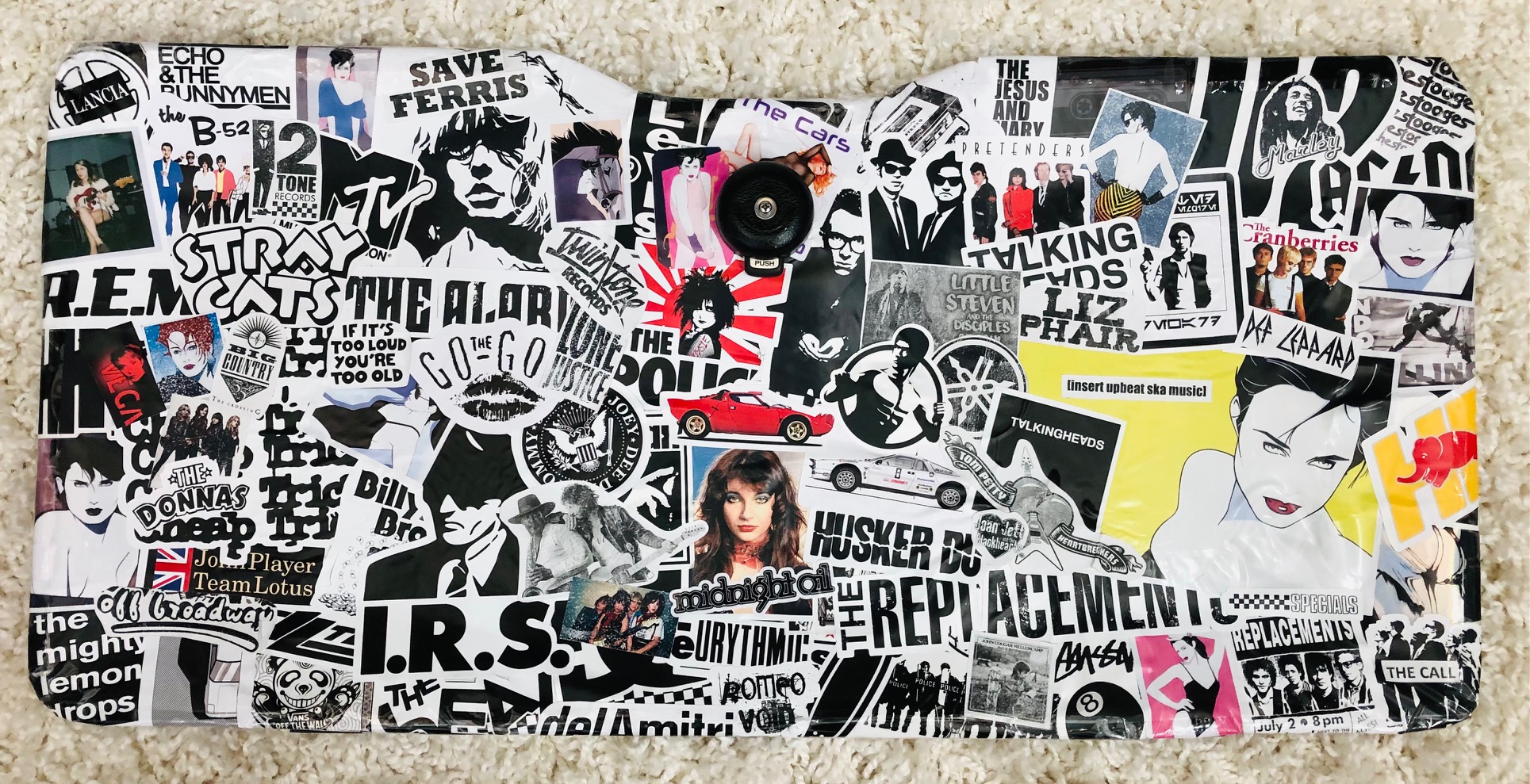 Anyway, so after months of weekends pandemicing in place I now own a two-seat museum.  Or a late 80s / early 90s driveway art installation, it's hard to tell.  A dumb, loud, silly something with more period-correct parts than Joan Collins.  A period-correct something to a life that never happened, and I couldn’t be happier about that.  Marcia, Amanda and Colin arrived because Pete found a house with an extra bedroom at WIU.  And I took my $83 life savings and my first Jeep with the Levis badges to Macomb with the vague promise of something that turned out to be everything.  I recall one psychology class in the mix and there was probably something about finding comfort in the past in uncertain times.  It was a decade (THE decade) of heart-on-your-sleeve, post-punk new beginnings.  Searing colors, synth-pounding noise and the youthful conviction that progress could not be stopped.  All those young faces and all those young bands on the sunroof cover have grown older and some have passed on.  But the art they made blazed a trail at a time I was finding my own path.  I can't leave the county these days but i can pop a cassette into the Alpine, turn up the fun knob, and face the road ahead forever timeless.  Or maybe, just ever hopeful.

Anyway, if you need A John Hughes Film sticker call me and I’ll give you a good deal on it cuz life moves pretty fast and if you don’t stop and look around once in a while, well … you know.