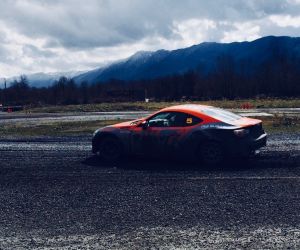 I gotta lose some weight.  A hundred and fifty pounds, or thereabouts.  It’s the only way I have any hope of regaining the crown of fastest go-karter in the Malin household.

A week with Colin on Spring Break in Seattle has come and gone, too quickly.  I lost at everything.  Karting.  Rally driving.  Mountain biking.  Snowmobiling.  Record finding.  Joke telling.  Brought along a bat and bag of baseballs and, if the weather hadn't been cold and rainy all week, I would have lost some balls over some fences too.  Some other day, some other place.  There’s fences everywhere.

If it’s raining outside, there’s snow in the mountains and karts indoors.  So, let’s get to it. The week flew past in a blur of speed, lateral g’s, hastily signed rental agreements and wry observations.  Time with loved ones goes too fast.  Time alone drags on like a stalled cold front.  Lucky to have the son I have, and one who still wants to hang with his father.  We trade records and books like the strangest of brothers; the ones who don’t fight.

Making it up as I go, my dad didn’t have the physical or financial ability to do such things with me.  So I really don’t know if I’m over-compensating for that or just being normal.  It seems normal to me; to be the adventurer / risk-taker / speed-increaser as a guide to pushing back against barriers and fears that constrain others.  So, when he passes me on the kart track, or loses me in the distance on a snowmobile as I’ve crashed and he speeds onward, unaware, I think to myself, my work here is done.

I also think to myself, I’m getting old and slow.

We head out to the coast and it all comes into focus.  Colin gets in the best two-word joke of the week (no soup) as we wonder what local fare awaits us in Forks, before arriving at the “beaches” of Olympic National Park.  Accustomed to the panorama of coastlines these days, where northwest Washington meets the Pacific makes no apologies to even Big Sur in terms of beauty.  It’s a rugged, brutal and exceptionally spectacular intersection of land, sky and water.  There’s thousands of trees washed up on the high tide edge of the forests.  There’s millions of smooth eroded boulders, looking like a huddle of walruses waiting for the sun.  The boulder/walri sit in billions of perfectly flattened, rounded and smoothed rocks.  The world's best collection of skipping stones, as near as my half century of wanderings can figure.  There’s the pounding surf, smoothing and flattening everything under its sway.  And - who knew - some patches of blue sky and sun.

We’ve arrived two hours before sunset, and scout locations for the best pictures.  We head north for a bit, and then decide to reverse direction.  There’s a wisp of a promontory accessible at low tide that’ll put us in position for the sun setting behind some sea spires.  It’s a risky place to shot from, particularly as I’m working from memory on the tide tables, and getting this wrong could have us cut off from land as the tide rolls back in.  But, the calculus of risk and reward defines the life you have, and how fast can tide roll in anyway, so we do it.

The sun starts to set and all the planning for the best pictures meets the practical realities of shifting clouds and rising seas and the relentless march of time.  The sun sinks into the ocean like a hope slowly fading as the moon rises above the horizon in the east to mock us.  We’re running from one location on the shrinking sand to another to get the sea spires and sun just right in the viewfinders.  The ephermality of time and the hegemony of natural forces have never been so palpable.  The sun setting, taking away light.  The moon rising, literally pulling the ocean up to cut us off from land.  An old(er) man and a young man, trying to get just one more picture - just right - as the earth, ocean and solar system itself all conspire against us.

Howard Roark laughed.  And so did I, on that dwindling spit of terra not gonna last firma.  So did Colin.  We laughed not at our dominion over nature, but at our union with it.

Time.  Time is a race for fools.  Long may we laugh.