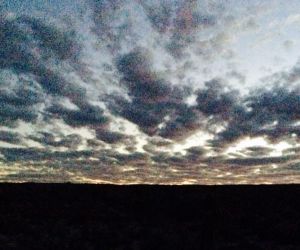 In the office before the sun touches the Pacific.  The State has two questions about the homeless grant and I want the answers - good answers - to be the first thing they see in the morning.  Not to read too much into the questions but, if those are their only remaining questions, there might be sixty or so homeless folks who have real homes by year’s end.  The city manager’s office printer doesn’t want to wake up and neither does the behemoth City Hall printer.  THE swear word audibly escapes.  No one’s in City Hall so it doesn’t go on my permanent record.  I stopped swearing when I left Davenport but I also stopped swearing when I left Vernon Hills, so the stopping is more a process than an event.

Get the tech figured out and it's still dark when I get the answers emailed to the State.  Turn off the lights and head over to Garland Ranch for a hike up to the fire lookout tower.  I normally do the hike Sunday mornings, Tuesday evenings and Friday afternoons now that City Hall is closed on Fridays, but I have meeting with a developer in the afternoon so I’ll get the cardio/legwork out of the way early.  It’s pre-dawn chilly at the start so I have a vest on but the cardio kicks in on one of the long uphill slogs and I pause to shed the vest layer.  As I pause I notice a felled tree limb with grain so gorgeous I tweet out a picture of it with a standard issue bemused quip.  On my scorecard, that more than balances out the swear/shout nobody heard.

It’s a smoky hour and a half hike up to the fire lookout tower.  Get to the top and can’t see anything between the smoke and fog.  The solitary cardio uphill blasts are as therapeutic as they are healthful.  Focused mostly on optimizing oxygen transfer and heart rate for the big mountain assaults, they tend to be mind-clearing endeavors.

Can’t say the same for the downhill component.  Down is a little gnarly on the knees, but otherwise it’s a gravity-charmed lope.  Which leaves the grey matter with too little to do.  So it starts doing what it does.  Thinking through the homework assignment.  Critiquing the answers I sent to the State.  Figuring out how to do all the work necessary if we get the grant.  Preparing for the afternoon meeting with the developer.  Singing songs.  Meandering from whence I came to where it all cascades toward at the end; end point yet unknown.  Smiling at memories.  Praying for those lost this day, that horrific day in 2001.  The elevation lessens.  The knees gnarl.  The mind meanders.

Some leaves prompt the biggest takeaway of the nature therapy session.  Fallen leaves on the path are starting to resemble a 1970’s carpet of rust and orange and I’m reminded that my favorite season is nigh.  I’ve long maintained that fall is my favorite season, for many good and valid reasons.  I’ve probably enumerated them.  But these last five falls on the coast have me thinking. The perfect climate of the region has one drawback that only reveals itself with time.  That drawback is time appears to stand still.  Trust me, that’s what they sell to the tourists.  This place that you once visited will be JUST LIKE it was back then.  Remember when you were young and your parents brought you here?  Remember when you were young and on your honeymoon?  Come back, because it will be just like that, again.  That’s a dangerous idea to build a regional economy (much less a society) on.  But it sure sells hotel rooms and hoodies with otters on them.  The great news about Seaside is we’re operating in the future, rather than the past.

Turning a corner on the trail, two things strike me in quick succession.  The first is I’m rather dense to have taken five years to figure this out and the second is what I figured out.  The perfect Seaside climate has robbed me of summer and winter.  It's never too hot or too cold.  It's always fall-like, and that's charming when you first arrive.  It's my favorite season, all the time.  But, years pass, winter never arrives and it finally dawns on me.  Fall was my favorite season because fall always used to mean winter is about to happen.  Winter!  Hockey.  Skiing.  Sliding around.  Hot cocoa.  I miss winter so much I climb up this small mountain three times a week to be ready to climb ridiculous slopes and get light-headed in the Sierras and Cascades just to experience snow and cold and wind and ice high above the treeline.  In the Midwest, all that's right outside the front door.

Here, in the forest, if a tree falls with no one to hear it, it still makes a sound.  It also makes a new home for more than eighty species of plants and animals and creates an opening for other trees in the canopy.  Beyond the assurance of bears defecating there, this is the essential lesson of the woods; the forest exists not for any one plant or animal but for the collective of them.  I think that’s why we like them so much.  The interdependence and coexistence.  It certainly is a salve for the division and selfishness that coarsens life these days.

I come upon a carpet of fallen oak leaves.  It’s such a wonderfully textured scene I take a picture in case I ever need a texture backdrop for a ppt slide. 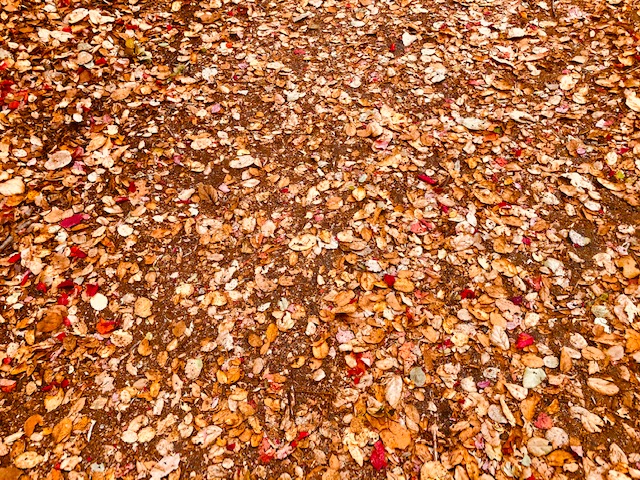 Another twenty minutes or so of downhill and I notice what is, essentially, the opposite of the fallen leaves.  There’s a young tree in the forest cantilevered over the trail trying for an open spot in the tree canopy.  It’s a similarly ppt worthy image and I take a picture of that too. 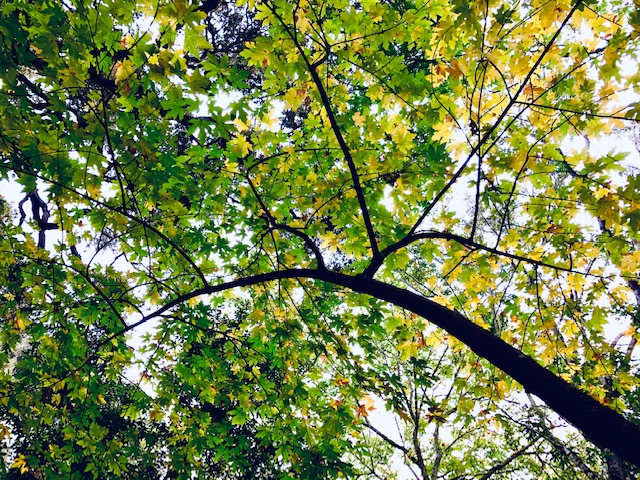 Because it’s quiet in the woods and the thinking comes easier, the thinking happens.  Some leaves already fallen, adding back to the soil from whence their tree is growing.  Some leaves still soaking up sun, their tree trying to find its place in the forest eco-system.  The first reaction is to see the green leaves more positively, and see the fallen leaves as something past, something no longer growing, something less than the green leaves.  But on this quiet solitary trail where the thinking comes easier, that doesn't seem quite right.

The lesson of the forest is we’re all intertwined.  The fallen rust and orange leaves are as necessary as the green and yellow ones.  Even in places where the seasons are foggily fugacious and time seems to stand still, we're all an interconnected process, not an event.