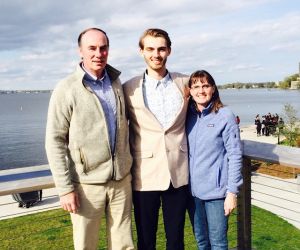 “Jealous?”  The youngest effortlessly ambles down the stairs ahead of me and looks up.  I’ve a new downward stair procedure given the toe thing, and it’s not exactly fast.  I smile because, just walking is its own small miracle.  Four cars and one truck have hit me so far, and that last one blew up a few bones in the left foot.  No biggie.  I also smile because boom boom boom boom boom boom boom.

If you have a large teenage son and a multi-story home, you know the sound.  Thundering down the stairs like a small herd of elk, on the way to something fun.  But this boom boom boom boom boom boom boom was much faster than usual and came with the exclamation “I’m in!” And so, in the new way that we learn of such things via smartphones, he flashed the screen and there it was.  He was accepted to the University of Wisconsin at Madison.

We toured other schools, but UWM was the one he wanted.  With good reason.  Snow.  Skiing.  Academically strong.  Gorgeous campus.  The best real estate program in the nation.  Cheese curds.  Close enough.  Far enough.  A real city.

A great city.  I love Madison.  By my metrics, one of the five best cities in America, and maybe the best of the bunch to actually live in.  Midwest food.  Actual seasons.  Quality beer.  Never a shortage of ice cream.  High culture, low culture, activism, and one of the most heavenly tableaus ever created on which to practice the art of urban planning.  Lake / City / Lake, as the geographic summary goes.  Two big bodies of water.  One small isthmus on which to center a capitol square, and link it to a heart on its sleeve public research university along a lively pedestrian street.  It’s a spectacular place to be a human, and it must be sublime to get to live there while filling your head with all manner of new stuff.

What’s also sublime is having the family all together, if only for a few days.  The kids walk ahead of us, talking to each other.  We walk behind them, smiling the goofy parent smile.  Of all the people you’ll know, you’ll know your sibling most and longest.  So treat them well.  And of all the people we’ve ever known, only those two walking ahead of us are the ones Marcia and I have known from the start.  They’re pretty swell.  The left foot hurts on the long day’s march as Colin shows off the campus and city like a native, but who cares.  How blessed am I.  How blessed are we.

More blessed than cold, and it was freezing.  Dress shirt and a sport coat because it’s graduation and those things are warm, right?  Wrong.  There’s a windchill in the upper reaches of Camp Randall.  The girls are huddled in jackets and a Cubs blanket.  I’m straight up shivering through the three-hour tour-de-talk, and either the wind or memories or both is making my eyes water.  The youngest rises with the biz school classmates, some formalities are proffered en masse, and the youngest is through college.  That’s a milestone thirty-six years in the making.

Dear ol’ dad handed me fifty bucks back in 83, and I was off.  All the doors that ever opened, opened because of that drive to Macomb.  Thanks, dad.  College is now the norm, rather than the exception, for the Malin clan.  The colleges keep getting better, so there’s something to this whole American Dream thing.

Been a tough four years.  The separation’s not easy on anyone.  And I wish I could have seen more of him.  Just head up for lunch, or dinner or a concert or a woodworking project.  But that wasn’t to be.  Some of those watery eyes in the windchill section may have been that.  Leave that there and smile.  The youngest is through the college of his choice too, and without a penny of debt to weigh him down.  Dad's fifty dollar investment in the future of Malins way back in 83 yeilding ever greater dividends.

Am I jealous?  Of course I’m jealous.  He’s taller, smarter, funnier and way more handsome.  He's a better woodworker, skier, ball player, musician and driver.  He's got ten fully operational toes!  Graduating from a school six hundred some rungs up the ladder from Western Illinois University.  Well prepped and his life ahead of him.  But that’s how it’s supposed to be.  So it’s a weird kind of jealousy.  It’s happiness.

Kick some doors down, son.   Be bold, be responsible and, most importnatly, be kind as you do it.