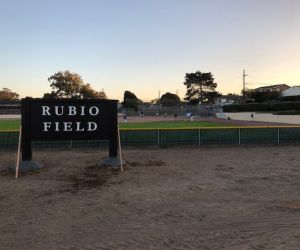 The sun is setting.  The gators are restless.  Gators with a capital “G”.  A dozen nine year-olds have stopped practice to be part of the show.  There’s an unveiling to pull off and the Seaside Pony League Gators are here so let’s have them pull the tarp off the sign.

The top-secret sign has been underway for weeks now.  Mayor Rubio is taking a pass on the upcoming election.  He’s served the community for decades, including on this ballfield, but now he’s winding down his service, on his terms.

People tell me what a commanding force he was, and while it’s not hard to believe, I’ve only seen the kindly, reflective Ralph.  Confronting mortality in any honest way tends to lead good people to even more thoughtful behavior.  That’s what I’ve seen, keeping quiet and sitting next to him for three years on the Council dais.  Politics is toxic these days across the nation.  The local level stuff is mostly personal and because you can’t really talk to Congress but you can show up at city halls everywhere, the front-lines of democracy aren’t for the squeamish.

From my vantage point, Ralph has manned the post honorably; never less than a gentleman in my presence.  You can disagree with some choices he’s made or find some moment to criticize in a meeting that lasted into the next day.  But I’ll tell you.  I’ve sat next to him while he’s suppressing pain for the greater good of the community, and he’s not complained once.  Vote for who you vote for.  I don’t do politics.

I do do woodworking.  And baseball.  So does Ralph.  So when someone suggested we name a street or building for him, I appreciated the thought, but had another thought.  Let’s name a ballfield for him.  There ain’t nothing cooler than that, if you love the national pastime.  This one is just a few doors down from home.

There’s a ballfield in Davenport named for Rand Wonio, and it’s my favorite place in town.  I spent the two most glorious of fifty-five years (so far) in service to the game there, and Rand spent well more than that there.  Rand’s somewhere in that Dyersville cornfield these days, but I got to say a few words about what a great guy he was that day we named the field for him, and we got to sit in the bleachers and talk about family, and service, and the game.  We promised we’d go to a Cubs – Cards game together when he beat cancer, but we never made it there.

So when the Cubs came to visit the Giants and Mayor Rubio suggested we go, there was no stopping us.  Certainly not that distracted woman in the SUV who nearly killed me.  I crutched my way into the handicapped seats and Ralph and I were anything but Mayor and City Manager.  We were ballplayers, fathers, coaches.  He had his team and I had mine and his boys won that day.  We were boys too, at least for a few hours.  The game does that to you.  It transports you back to a time when there weren’t girls or bosses or politics or mortgages or health issues.  There weren’t any problems other than figuring out what the next pitch might be, and taking your best shot.

I brought my mitt with me to the orphanage all those years ago, and carved out some sense of comfort, and hope, in that lumpy outfield.  I was either on the ball diamond or in the woodshop back then, and it’s not lost on me that I still find comfort on ball fields or in woodshops, decades later.  The "woodshop" lately was the back room of Seaside Creates, where the top-secret sign was crafted on nights and weekends.  The PW or Fire guys would flip the thousand pounds of cedar and redwood for me as the double-sided sign went from slab to the largest thank you note I’ve ever written.  Thanks for the help, gentlemen.

Life's lumpy, so the Gators were an impromptu addition to the unveiling ceremony.  The Mayor and Mayor pro-tem were being recognized along with numerous volunteers who help make Seaside go at a community center across town, and we were using Facetime to telecast the unveiling of the Rubio Field sign as a surprise at the party.  The funnest part was keeping the Gators entertained as the speechifying went on at the party.  Nine year-old ballplayers aren’t known for their ability to wait patiently, but the good news is, if I’m good at anything, it’s endlessly buoyant dugout chatter.  People who watch Council meetings would be stunned.

The Facetime feed finally goes live and it’s Showtime!  The Gators do great.  The Mayor’s surprised.   Coach Dave calls the boys back to practice.  The PW guys secure the site where the Mission Impossible concrete is still curing.  The sun sinks into the Pacific, setting on a happy Seaside Thursday.  Life moves on.

The earth spins.  The games go on.  The sun is always setting somewhere.

Put in the work.  Take your best shot.  Be kind along the way.