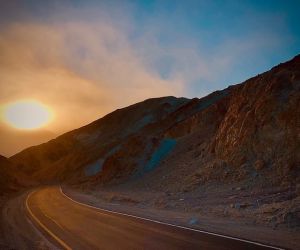 In the movie, it would start raining.  In life, it did.  Stay at home order lifted and a four-day weekend means four thousand miles is doable.  No less an authority on cars that Mr. Clarkson himself declared the world’s fastest car is a rental (extreme example here), so there I am standing at the outdoor Enterprise kiosk, getting something to flog to Iowa and back.  Right after the City Council meeting ends, it’ll be hammer down to I-40, where the Friday night car sleeping will be a balmy four degrees.  Better than the minus teens on I-80.  Marcia doesn’t know I’m coming, but it is Valentine’s Day weekend, so there’s that for a clue.

Dude in the green vest hands me back my license and tells me it’s expired.  Long story short, I blame Cadillac.  Rented one of the fast ones a couple years ago and in the middle of Arizona nowhere on the way to visit Amanda got a ticket.  Paid it years ago.  Head over to the DMV to check what’s wrong with the license and that’s where I learn there’s a hold on it in Arizona.    In a couple days I’ll learn some chunk of software says I owed another $10 for some fee but, at the moment, Arizona is an hour ahead this time of year, and already closed.  There will be no four thousand mile COVID defying solo rental car dash this weekend.

I walked the mile or so to the Enterprise place and, in something I couldn’t make up, it started raining about five seconds after the guy handed me back my license.  Processing the disappointment, I didn’t even notice for a few blocks on the walk back.  But water-logged shoes get your attention.  Do the Council meeting singing in the rain routine via Zoom while doing risk calculus of hurtling to Iowa and back in the Jeep across thousands of miles of frozen Interstate.  Short wheelbase and high center of gravity is a handful at highway speed in the best of conditions.  Any slickness means flying off the road in whatever direction Mr. Newton spins the wheel of fun, and not having a valid license isn’t going to help when it comes time to charm the insurance adjuster.  I’m stuck.

Life’s a one take movie, and I don’t care what it means.  I’m saving up my tears, for the crying scene.  So goes the chorus on track two of Aztec Camera’s fourth album.  To go on, We were two in a million, Stars like the ones in the sky, A love scene and a vision, We saw the world and we waved goodbye. Watched the fireworks falling, We kissed and innocence died. The sound of certainty calling, A world (or, at least, the State of Arizona) that wouldn't be satisfied.

It’s a good little song, and music’s one of the ways I keep my spirit up through the pandemic intensified dislocation.  There are other ways.  Exercise.  The do-gooding of the day gig.  Generalized, non-specific hope.  Ice cream. Building / fixing stuff.  Wandering the National Parks of the West.

Death Valley is yet to be checked off the list, and the best time to do the checking is winter, so that’ll be Plan B.  Load up the Jeep, head down to the downest spot on the continental plate.

If you ain’t been, my only advice is go in the winter.  It’s big and brutal and beautiful and absolutely deadly in summer.  Winter’s just big and beautiful and brutal.  The winds were steady at 50 mph and gusting to 70 mph or more, so it was an abrasively immersive experience.  Multiple trailers were flipped on their sides, with cargo-shorted dads scooping up vacation flotsam scattering in the sandstorm.  To step out of the Jeep was to be pelted with sand, grit and salt brine, but I didn’t drive all that way to just drive around in the Jeep, so pelted I was.  Days later, I'm still digging grit out of my ears.  The warning signs on the unpaved trails are cute.  They start with warnings that four-wheel drive is required.  Then, when the trail gets tougher, they add in a sign that says “high clearance required”.  Finally, they add in another sign that says “short-wheelbase only”.  Four-wheel drive, high clearance, short wheelbase?  Just post a picture of a Jeep, and be done with it.

I can’t imagine that I’ll ever go back, but it sure was memorable.  Got to listen to the impeachment on the satellite radio all the way.  What a mess.  But the most memorable thing happened in the next valley over.  Twenty-some miles out of the hellscape of Trona, there’s an enormous valley skewered with a two-lane road that nobody must use unless they’re going to Death Valley NP.  You come up over a mountain range and drop into the valley where there is not a single thing to be seen for as far as you can see.  I can’t stress this enough.  There’s nothing to be seen as far as you can see in any direction.  Not a person.  Not a building.  Not a shack.  Not a car.  Not a tree.  Not an anything.  Just rocks, and sand, and rocks, and sand.

Come around a canyon corner to the floor of the valley and there’s a traffic jam.  Whoa!!! Jeepster.

A dozen or so cars, fully stopped.  First thought is an accident and I reach over for the first aid kit.  But it’s not an accident.  It’s a donkey.  One donkey, standing in the middle of the road.   Perpendicular.  Perpendicular, refusing to move an inch.

The shoulder of the road is too rocky unless you have a Jeep, so the donkey has everyone but me trapped.  Just standing there, I admire his / her pluck.  He / she has commandeered the road, and what are you going to do about it?  I klunk the Jeep into 4WD Lo, and amble over the shoulder boulders at walking pace.  Take that, Enterprise nonrental a car.  And then I see two more donkeys, who are being fed sandwiches from people who are stopped in a Jeep Compass (not really a Jeep).

These three donkeys are running a scam, and I’m quite impressed.  In a landscape where there’s literally nothing but rocks and sand for as far as you can see, they’ve figured out how to make a living.  You go, donkeys.

I should probably be mad at somebody in Arizona for not telling me I owned them $10.  And while I was frustrated, and wet and cold walking home, and then sandblasted on the weekend I could visit Death Valley, anger remains pointless, except for dividing voters.  Which is pointless, unless that’s your scam, and it’s still pointless even then.

The world spins.  The votes are cast.  The sand abrades all that it touches but not every trailer gets flipped.  There’s rocks and sand and dumb speeches by Senators on the satellite radio.  And there’s three little donkeys out there, just trying to make a living.  Just please stay off the Interstate, because that 4,000 mile weekend was only delayed, not stopped.

We’re still two in a million, with more than enough innocence left for the third reel.  The song plays on.