There Once Was A Town 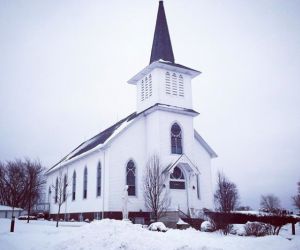 I thought we were going to step outside and fight.  That’s how tough of an interview it was.  Larry Laschen was sitting in on my interview to be a Management Analyst for the Vernon Hills Police Department and was peppering me with questions.  I was young and dumb.  Too dumb to be scared of the guy everyone else was petrified of.  A giant of a man with a piercing intellect, booming voice and reputation, I would learn, for not suffering fools.

I only remember one question and answer sequence, near the end.  The rest was a blur.  “Do you have any weaknesses?”, Larry demanded.   “Racquet sports”, I young and dumbly declared.  He shook his head and laughed his hearty laugh.  Another job I won’t get, I thought as I made my way out.  But there was a follow-up interview - another near fisticuffs affair - and then a job offer.  I wouldn’t be working for the Police Department, I’d be working directly for Larry.  He had been Police Chief, but was now Village Manager of an inclusive, fast-growing city.  He needed help, and I was it.  Seventy and eighty hour weeks, for almost eleven years.

Fast-forward three decades, and there’s a foot of fresh snow the 737 settles into on the O’Hare runway.  Larry’s beloved wife Joan has passed away, and there’s respects to be paid.  The snow day has closed schools and businesses, so the rental SUV doesn’t crash into too many things on the relatively traffic-free roads.  I enter Vernon Hills from Route 22 and do my own hearty laugh at the “Vernon Hills Town Center” entry monument.  We basically stole this corner from Lincolnshire, with some of the brash, can-do escapades Vernon Hills was known for back in the day.  The Chicago Tribune amusingly tells part of the story in a "can you believe it?" editorial, here, although they miss the part where we timed the three-page legal description to be published on Thanksgiving Day, when nobody at Lincolnshire City Hall would be working.  We were workaholic, full-contact Vernon Hills brawlers and, to this day, the city boasts a AAA bond rating and no municipal property tax because of it.

Vernon Hills was surrounded by six cities and unincorporated Lake County.  Lake County is the promised land of the Chicago metro region and most of the neighboring cities were wealthy, exclusive enclaves.  They were perfectly happy with the status quo of Vernon Hills being barefoot and pregnant, and fought the community’s ascent tooth and nail.  Larry and I were happy to punch back (which explains the interview approach) and create a uniquely livable and successful community.  We took the fight to anyone who compromised the community’s future, and I don’t recall much apologizing to the developers I smacked around as they either upped their game, or were sent to Gurnee with their schlock.

Larry gave me huge assignments from the get go (not that he had much of a choice).  Annex a hundred acres here.  Annex a thousand acres there.  Draft development agreements.  Re-write the zoning code.  Build a computer network.  Build a park.  Create the personnel handbook.  Develop the annual budget.  Build a fiscal impact model.  Be the sole staff representative to the Planning Commission.  Choose the architect for Village Hall.  He let me do everything there was to do, as I watched him define leadership.

Go to the problem.  Be on the record.  Take responsibility.  Swing for the fences.  Never give up.  It doesn’t cost anything extra to be nice.  Support employees.  The most important thing you do is shaping the organization.  Make it difficult to get hired, and make it more difficult to want to leave.  Ask questions.  Be what the organization and community needs you to be.  Innovate.  Hire people smarter than you (me, excepted).  Have fun.  A fool can ask more questions than a wise man can answer (oft repeated in conversations with me, for some reason).  Don’t take any shit from anyone who doesn’t love you.   No one can take your integrity from you – only you can give it away.  Family is most important.

Eleven years of watching and learning; it was a master class in being not just an unconventional city manager, but being a man.  He had a son.  And, at work, he had another.  When he retired, he was the one who informed me I wouldn’t be granted an interview for his job, because the Village Board wanted someone about as old as I am today.  He thought that was bs, and was very happy I ended up leading a city five times Vernon Hills’ size just a couple years later.  I last saw him in Davenport, about fifteen years ago.

I walk into the church, not knowing what to expect.  How broken would he be?  Fifteen years, and now, in his eighties.  Older than my father, when he passed away.  At the funeral of his light of his life, sparkplug wife; a woman he married sixty-three years ago, and counted his blessings for every day.  I’d be a mess.

He is talking with some family members, and has his back to me.  I patiently wait and they motion to him there’s someone to his right.  He turns, and years fall away.  “Craig (his voice has softened) … you … you didn’t have to come all this way.”  “Larry … I owe you everything.  I’m so … so sorry to be here.”  The two toughest guys in Lake County (circa 1988 – 1999) start to tear up, and hug.  The years fall away.  He takes me around the lobby and introduces me to people.  His family, his grandkids, his pastor, his daughter, his son.  “Family Craig”, “Family is most important”.

The best mentor I could ever hope for.  Truth told, my second father.  Truth told, his second son.  We do step outside, at the end, and smile for the first-rate community we shaped together.  Good work, and family, endures.