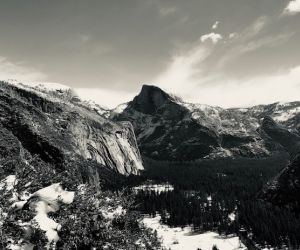 Ooo, let’s go up there!  Amanda has seen the condors in the distance, soaring over the bluffs in Pinnacles National Park, and she wants a closer look.  So, up we go.  A girl – no, young woman – after my own heart.

Been more than a year since I’ve seen Amanda, Colin or Marcia.  Hundreds of thousands of families have had it worse, so I’m not complaining.  It’s hard, but hard is always relative.  The family goal was / is to get through the end of this thing, and still be there for each other.  Her status as teacher / hero got her vacc’ed first and, with Spring Break more than a little messed up, she drove up to visit.  Took my first day off in a year, and we headed up to Yosemite for some national park scale social distancing.  I was on the list to get vacc’ed as an essential worker that day, but would I rather be just a little more assured of life or spend the day with Amanda.  Not much of a contest, that one.

Yosemite is spectacular on the worst of days.  When it’s snowing, it’s magical.  We get a hike in to Mirror Lake while it’s snowing and then meander over to the Ahwanhnee for the night.  The best dining room on the planet is open, with some precautions, and we have our first indoor restaurant meals in over a year, distanced from other diners by the shear glacial span of the room.  The snow magic has fun with us the next day as we hike to upper Yosemite Falls, and get clumped on by snow melting off the redwoods in bushel-sized dumps as we make our way up the trail.

Last time I was home, I packed one of my favorite pictures in my work bag to bring to Seaside.  It’s the smallest of things, not more than two inches square, including the lovely little wood frame.  It’s a picture of Amanda, clinging to my back as I give her a piggy-back ride on a hike in a Lake County Forest Preserve.  She can’t be more than four in the picture, and she’s smiling as four-year olds do, unaware that anything could ever possibly go wrong.  I have the same smile in the picture.

I packed the piggy-back hike picture in the work bag to bring to the One-Ga-Low, and put it on a shelf I made for family pictures and other totems of a life I once knew.  The cottage is the smallest of things and the family pictures and totems are spirit expanding, and strengthening.  One morning, as I was headed out the door to work, I looked at the pictures and said, out loud and brightly to no one but myself, “family”.  I now do so, every time I leave.  It’s a small thing, but it makes the big thing seem easier.

The big thing, the separation thing, is still a thing.  Hopefully, that thing will not be a thing within the year.  But the Stockdale Paradox don’t come with no guarantees.  Wouldn’t be much of a paradox if it did.  So I Shackleton on, and savor the joy where I find – or recall – it.

Two national parks, a national monument, a national register of historic places and a national maritime sanctuary in three wonderful days with Amanda get filed away in the memory banks, to be called up when needed and, most wonderfully, to just reside there, right next to where the four-year old smile resides.  As we were hiking, I made it a point to let her lead.  There’s the practicality / kindness of letting the shorter set of legs set the pace, but it was much deeper than that.  That little picture - the smallest of things – rests on the shelf I made in the place I’m renting as the big thing plods onward, with the other pictures and totems buoying the spirit.

But nothing, not the condors soaring, not the whales dancing, not the falls falling, is more buoying than watching her or Colin press forward on the trails they share with me, or the trails they make themselves.  It’s the kind of thing that, were Marcia near, she might look at me, smile and wink.

Marcia's not near.  So … I’ll just imagine it, instead.